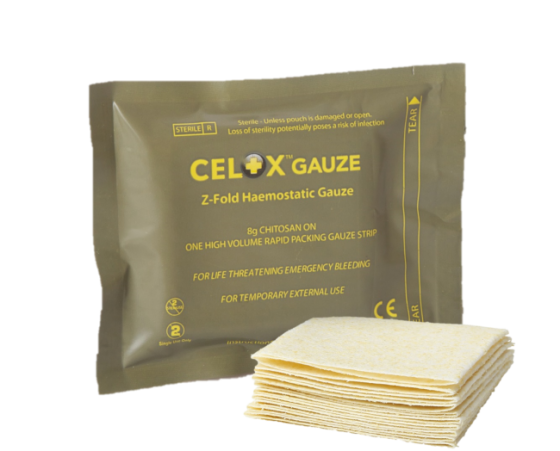 The only haemostatic gauze used by the UK Minstry of Defence and the haemostat of choice by multiple NATO forces. Celox™ Gauze is the most effective dressing for immediate haemostasis.

Celox™ gauze haemostat is for pre-hospital use by trained emergency responders to stop bleeding from life threatening injuries, including those involving major arteries.

Pack the gauze directly on to the bleeding source and hold pressure for three minutes to stop bleeding from arterial injuries, gunshot wounds, road traffic accidents and other life-threatening bleeding injuries.

• Highest observed survival in US DoD testing.
• Published success in the field.
• The sole haemostat of choice for the UK MOD.
• Chosen by multiple NATO forces.
• Stops hypothermic bleeding as found in life-threatening traumatic injuries.